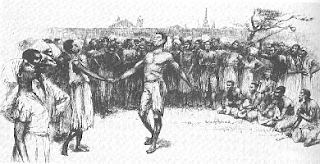 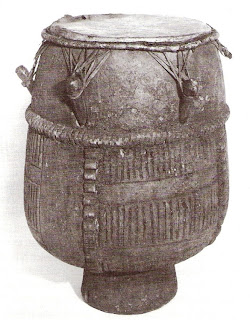 During the colonial conquests of the Western empire Christian missionaries and slave owners tried to "de-drum" Africans and the African diaspora, with the exceptions of the West Indies, South America and in some places in the United States. For Christians drums were instruments of paganism, the devil, and sensuality. One writer on multicultural worship states that "It is because drums accentuated rhythm in worship that it was particularly targeted and criminalized by the colonial masters." (1)

In a recent study of world Christianity scholar Lamin Sanneh critically describes the missionary effort to ban drums from African worship services: "The West's Teutonic inhibitions about worship as an expressionless formal activity in which the body is propped up in a state just shy of rigor mortis contradicted every instinct and reflex in African life. . . . A wet blanket cannot muffle a drum." (2)

Another reason drums were banned in some instances in early America was because the drum was understood to be an instrument of communication. Since drums could "talk" they could be used to gather slaves together to plan rebellion. Slave owners sought to prevent African slaves from signaling for rebellion with their drums. In 1740, after the Stono Rebellion, the South Carolina colonial assembly outlawed hand drums.(3)

In a similar colonial context as early as 1696 the legislature of Jamaica passed a law against gathering and drumming. The law was enacted to prevent resistance to the slave system.

for the prevention of the meeting of slaves in great numbers on Sundays and Holidays, whereby they have taken liberty to contrive and bring to pass many of their bloody and inhuman transactions...no master, or mistress, or overseer, shall suffer any drumming or meeting of any slaves not belonging to their own plantations, to rendezvous, feast, revel, beat drum, or cause any disturbance.(4)

Even with these instances of the banning of drumming in colonial contexts, there is evidence that in some locations within early America drumming was not forbidden, because it was not viewed by whites as a threat, or it continued in spite of any type of ban. An African drum in the British museum was acquired in Virginia (above photo) as part of the Sloane Bequest of 1753. The British believed it to be an Indian drum. It appears to be an Akan-style drum made of American cedar and deerskin. In the 1930's African-Americans told government interviewers from the Works Progress Administration about using hand drums in their rituals. These may have openly played these drums or they were ready made drums that could be disassembled quickly if need be.

One place where we know African drumming continued unabated was at location considered the seedbed of jazz, gospel, blues, and rock---Congo Square in New Orleans. Benjamin Latrobe, known as the "father of American architecture" and who worked in New Orleans, gives an eyewitness account from February 21, 1819 of encountering African-American drummers playing on drums and other African instruments in Congo Square:

An elderly black man sits astride a large cylindrical drum. Using his fingers and the edge of his hand, he jabs repeatedly at the drum head -- which is around a foot in diameter and probably made from an animal skin -- evoking a throbbing pulsation with rapid, sharp strokes. A second drummer, holding his instrument between his knees, joins in, playing with the same staccato attack. A third black man, seated on the ground, plucks at a string instrument, the body of which is roughly fashioned from a calabash. Another calabash has been made into a drum, and a woman beats at it with two short sticks. One voice, then other voices join in. A dance of seeming contradictions accompanies this musical give-and-take, a moving hieroglyph that appears, on the one hand, informal and spontaneous yet, on closer inspection, ritualized and precise. It is a dance of massive proportions. A dense crowd of dark bodies forms into circular groups -perhaps five or six hundred individuals moving in time to the pulsations of the music, some swaying gently, others aggressively stomping their feet. A number of women in the group begin chanting.

In other regions of early America African rhythm took on other forms, such as the "ring-shout" (Part 2)-next blog.